Abdul Khaliq Saeed has been announced as the new Chief Executive Officer for Etihad Airways Engineering. The Etihad Aviation Group (EAG) has confirmed that Mr. Saeed will be replacing Jeff Wilkinson who is leaving the post after 11 years with the company. 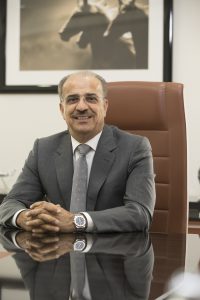 Mr. Saeed has over 35 years of experience in the international maintenance, repair and overhaul (MRO) industry. He joins Etihad from Abu Dhabi based Turbine Services Solutions (TS&S) where he was CEO since 2014. Before that, he was President and CEO of Abu Dhabi Aircraft Technologies (ADAT). He has also held senior positions with Mubadala Aerospace, Jet Airways and Gulf Air.

H.E. Mohamed Mubarak Fadhel Al Mazrouei, Chairman of the Board of Etihad Aviation Group expressed his delight at having Mr. Saeed as CEO of Etihad Airways Engineering and said that under Mr. Saeed’s leadership, the company will maintain its focus on innovation and business performance.

Mr. Gammell paid tribute to outgoing CEO Jeff Wilkinson whom he commended for leading the integration of ADAT to Etihad Airways Engineering. Additionally, during his tenure, the company became the largest airline MRO provider in the region, the first with European Aviation Safety Agency approval to manufacture 3D-printed aircraft cabin parts.

Mr.Saeed said that he was delighted to join Etihad Airways Engineering and looked forward to continuing the great work of the team to build their global customer base and enable Abu Dhabi’s growth as an aviation hub.