Pizza Month is observed in October every year. It was begun in 1984 by Gerry Durnell, the publisher of Pizza Today. The origin of pizza goes back much further than that. In Ancient Greece, they made flat bread which was flavoured with herbs, onions and garlic. In 1522, after tomatoes were first imported to Europe, people in Naples, Italy combined them with their bread products giving birth to the earliest form of modern pizza.

In 2017, celebrate Pizza Month with the mVisa Nairobi Pizza Festival. The festival will run from 29th September to 8th October giving diners a chance to enjoy 2 pizzas for the price of 1. EatOut have partnered with Visa to bring the biggest pizza festival yet which will include establishments from Nairobi and Mombasa. 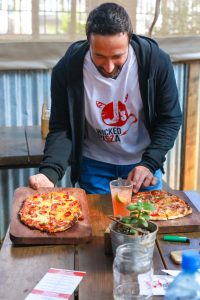 This year, the festival will feature over 50 restaurants. Some are keeping it traditional while others have designed custom menus especially for the festival. The partnership with Visa is on the back of the recently launched mVisa service, a cost free, secure and convenient way to pay with your mobile phone.

Visa will be rewarding those that pay for their 2 for 1 pizza deal with two free drinks. Visa will also be giving diners a chance to win a trip to Rome, the home of pizza.

To participate in the Pizza Festival, download the EatOut App to get your Pizza Passport.