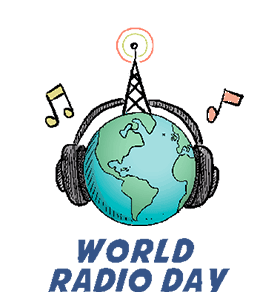 The invention of radio began in the late 1800s with experiments scientists were conducting on the connection between electricity and magnetism. On December 1900, the Canadian inventor Reginald A. Fessenden became the first person to send audio by means of electromagnetic waves.

13th February is World Radio Day. It was proclaimed on 3 November 2011 by UNESCO‘s 36th General Conference after originally being proposed by the Kingdom of Spain. It is a day in which we celebrate radio and the impact it has had in our lives. It is a powerful communication tool available at a low cost providing information as well as entertainment to the masses.

Crossover Kenya sat down with two Kenyan Radio personalities to find out about their personal and professional experiences with radio. First up was Patricia Kihoro of Homeboyz Radio. Patricia describes herself as a singer, actress, radio presenter, impro-comedian, social media and YouTube content creator. She spoke of thinking about being on radio for years and being a huge fan of Nini Wacera’s Late Night Show on Capital FM as her genesis into radio. As she tells it, she knocked down doors in order to get into radio and in 2010, she finally got her chance. According to her, that year, she heard about a new station opening up that would be playing African music. She got in touch with them but they were not ready to do a late night show which is what Patricia was interested in. Not about to give up, Patricia asked them what they needed at the time which was a news anchor. Patricia auditioned for the position and the rest as they say is history.

Patricia did not take any courses related to the radio industry and instead learnt on the job. According to her, she asked the 3 interns she was working with to teach her all they could about journalism. Regarding the longevity of radio since its invention in the late 1800s, Patricia agrees that it has definitely come a long way. According to her, it has evolved and expanded into more than talk radio and she believes that with the integration with new media, radio still has place in current times.

For anyone wishing to venture into the radio industry Patricia advices that you think about what makes you unique that you can bring to the world of radio. She adds that you should work on your talent daily, recording yourself on your phone or whatever is available to monitor your energy and diction. Finally, she advises that you listen to radio from Kenya and around the world and maybe also consider starting a podcast.

Look out for part 2 of this piece celebrating radio where we speak to Wanjira Longauer of Capital FM’s The Fuse and find out about her journey into the Kenyan radio space as well as her take on the longevity of radio and why radio advertising is still relevant.