Space For Giants is an international conservation charity that works towards saving elephants and securing their habitat. The charity has a new global campaign set to begin on 8th March 2018 called #MarchforGiants.

According to their press release, new global movement #MarchforGiants unites citizens, celebrities, and companies in unique activism to protect elephants, while amplifying support for the fight against poaching. 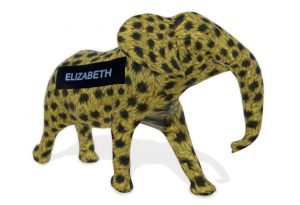 Anyone can take part in #MarchforGiants by donating £5/ €6/ $7 at www.marchforgiants.org. Sponsors customise their elephant’s design before it joins the ever-growing herd, and the funds raised protect elephants in the wild. The Digital herd grows as more people join the campaign.

#MarchforGiants will begin on Thursday 8 March on a big screen in Manchester, marching on to Birmingham then London, Paris, Amsterdam and Melbourne, before arriving in Kasane, Botswana on 16 March at a key conservation Summit being held to discuss the protection of elephants.

At the Summit, African Heads of States will meet with various stakeholders to cement the incredible progress already made to end the poaching crisis. The  #MarchforGiants campaign will boost that momentum by delivering a powerful visual illustration of global advocacy.

Max Graham, Space for Giants’ CEO, said: “There have been a number of huge gains in the fight to protect elephants. China and the US have banned trading in ivory. Poaching is back to pre-crisis levels in East Africa. This is all amazing, and we deserve to be celebrating. But there’s a danger here we could become complacent. Poaching is not over. Elephant habitats are not secure. The job is not finished. Joining the global movement that is the March for Giants is a way loudly to add your voice to thousands of others demanding we all keep the pressure up against poaching.”

#MarchforGiants is made possible through the generous support of many organisations including Ocean who donated  screen space and London-based creative agency 18 Feet & Rising who came up with the original #MarchforGiants concept. The state-of- the-art technology to create the experience was made by digital studio Popped while Freefolk provided 3D expertise. DOOH.com is facilitating the streaming of the virtual herd to iconic digital billboards worldwide.

According to Space For Giants one third of Africa’s elephants have already been lost, at an average rate of 55 killed a day.

To join #MarchforGiants visit www.marchforgiants.org  and design your own elephant to help fight poaching.