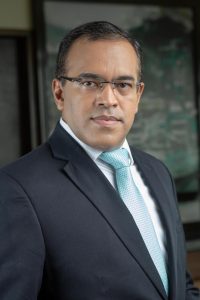 He will be reporting into Vinod Kumar, Chief Executive Officer Vodafone Business and will become a member of Vodafone Group Finance Leadership Team. We will announce his successor in due course.

Sateesh joined Safaricom PLC as CFO and Executive Director on the board on 1st August 2016 from Vodacom Tanzania Ltd, where he held a similar position.

He is credited with, among many other achievements, helping to build Safaricom shareholders’ value by 50% to KES1.2 trillion and improving business performance through Fit for Future Initiatives adding 6 percentage points on EBIT margin.

He played a key role in completion of acquisition of M-PESA Joint Venture from Vodafone and purchase of critical spectrum while ensuring efficient use of company’s funds.

He also assumed broader responsibilities in navigating the company through the phase when Bob Collymore was on medical leave and through transitions thereafter.

In his four-year tenure, Sateesh built a reputation as an outstanding finance expert in the region, a leader and a mentor, qualities that we at Safaricom have benefitted greatly from and we will deeply miss. He will leave behind a very strong team.

Tags: He also assumed broader responsibilities in navigating the company through the phase when Bob Collymore was on medical leave and through transitions thereafter., Safaricom CFO- Sateesh Kamath takes up a new role in Vodafone