Image by Gerd Altmann from Pixabay

In Whack-A-Mole, a popular arcade game, a plastic mole pops up at random from holes on a board.  When the player smacks the mole with a mallet, the mole retreats but then pops up somewhere else.  The object is to smack down the mole as many times as possible in the shortest period of time.  With the pandemic, think of the U.S. as a board with 51 holes – one for each state (plus D.C.) – with a COVID-19 mole that keeps having to be smacked down.  Except that, as we’ll see, the mole isn’t behaving randomly.

The graph below shows the weekly progression of new COVID-19 cases in selected states, starting the week of April 19, when the pandemic was at its nationwide peak.  To make state-vs.-state comparisons possible, the graph shows cases per 1MM population.  The states shown are the twelve that were hardest hit in those early weeks – call that Group A – and the ten states with the highest rates of new cases for the week ended June 21 – Group B – plus California, which did not make either list but is the most populous state and has seen a recent increase in new cases.

The states’ graphs are color-coded: Group A states are orange and red, and Group B states are blue and purple.  The states in each group are shown together in the legend.  The thickness of each state’s graph line is roughly in proportion to its population. 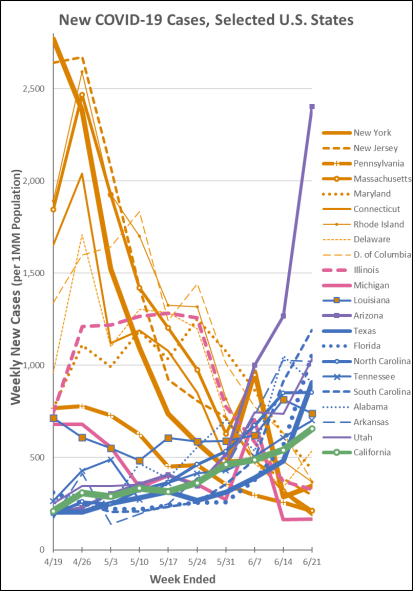 The color-coding enables us to see a clear distinction between the two groups.  New COVID-19 cases in the Group A states have declined dramatically since late April, while the Group B states have seen dramatic increases.  Some of principal takeaways:

The Northeast was the first victim.  Of the twelve states in Group A, all are in the Northeast, other than Illinois, Michigan – both with areas of dense urban population – and Louisiana – the only state that shows up in both Group A and Group B.  Since then, the Group A states (other than Louisiana) have seen impressive declines in the rate of new cases – to 500 new cases/MM/week or less.  That achievement is all the more impressive when we consider that it’s a lot harder to bring the rate of contagion down when it’s raging through a community, than it is to keep that rate down in a community where it isn’t there in the first place.

The South has risen again.  Of the ten states in Group B, all but two – Arizona and Utah – are in the South.  And all of them, other than Louisiana – which had an early outbreak attributed to the Mardi Gras celebration – are clumped together in the week of April 19, with weekly new cases of only 300 per MM or less at that time.

The Memorial Day spike?  Our graph is made somewhat harder to read and interpret by a spike in some of the Group A states during the week of June 7.  One possible explanation is that this was around the time that many states were beginning to reopen their economies, and about the time that new cases emerging from Memorial Day weekend activities would have been reported.  Even so, the Group A states seem to have resumed their decline in new cases the following week.

Some federal and state government officials have attributed the increases in reported new cases in the Group B states to increased testing.  That is at best only a partial contributor – after all, testing is increasing dramatically not only throughout the entire United States, but throughout the entire wealthy world, and in most of those places the rate of new cases is continuing to decline.

So what is different about the Group B states?  The debate will rage, but the simplest explanation is the most plausible:  These states haven’t taken the pandemic as seriously as they should have.  That behavior applies to both government and civic leadership, and to the behavior of the citizenry as a whole.  Until we all see COVID-19 as a public health problem and not just a statistical reporting anomaly, the U.S. will continue to play Whack-A-Mole with the pandemic.