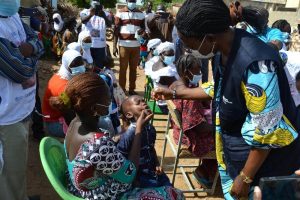 Polio is caused by a group of viruses known as the polioviruses and is a common cause of irreversible paralysis in children and adults. The disease is highly infectious and presents mainly with paralysis a few hours or days after contracting the virus, however, most polio cases are asymptomatic. It is transmitted through the faeco-oral route thus communities with poor hygiene and sanitation are particularly at risk of outbreaks.

In 1996, noticing the slow progress Africa was making towards achieving the polio eradication goal, the African Heads of State and Government, during their Thirty-second Ordinary Meeting of the, then, Organization of African Unity (OAU) held in Yaounde, Cameroun declared their commitment to eradicate polio from Africa. By that time, wild poliovirus was paralyzing an estimated 75,000 children in Africa, annually. That same year, President Nelson Mandela with support from Rotary International launched the “Kick Polio Out of Africa” campaign. This campaign assisted in increasing investment, bringing together leaders and communities towards eradicating polio. Polio surveillance and mass polio vaccination campaigns started to be conducted resulting in decline in number of polio cases.

In 1998, the then, WHO Regional Director for Africa, Dr Ebrahim Malick Samba, appointed the African Region Commission for Certification of Poliovirus Eradication (ARCC), an independent body of health experts mandated to certify eradication of the wild poliovirus.

By 2014, the African and Eastern Mediterranean regions were the only two out of the six WHO regions that had not eradicated the wild poliovirus and were reporting increased numbers of polio cases. This prompted the World Health Assembly to declare outbreaks of the disease as a public health emergency of international concern (PHEIC) and International Health Regulation (IHR 2005) recommendations were put in place. This resulted in renewed efforts to eradicate the disease from the two regions especially the African region.  The last case of wild poliovirus in the African region was reported from Nigeria four years ago on 21 August 2016.

In June 2020, having noted the improvement in surveillance and population immunity, which were demonstrated using innovative technologies, the ARCC accepted national documentation of polio – free status of the remaining four countries in the region namely Cameroon, Central Africa Republic, Nigeria and South Sudan

On 25 August 2020, at the Seventieth session of the WHO Regional Committee for Africa, the WHO Regional Director for Africa, Dr Matshidiso Moeti, will review the conclusion and report of the ARCC and if accepted will officially declare to all 47 Member States that the region is certified free of wild poliovirus.

It is important to note that this long journey has already averted an estimated 1.8 million children who would have been paralyzed in Africa if efforts were not made to eradicate the disease.

Tags: an independent body of health experts mandated to certify eradication of the wild poliovirus., appointed the African Region Commission for Certification of Poliovirus Eradication (ARCC), Dr Ebrahim Malick Samba, From 1988 to 2020: The Key Milestones in Polio Eradication in Africa, In 1998, the then, WHO Regional Director for Africa